Welcome to our first update since the anthology. These updates will be published every two months here on the Plume website.

Alexandra Jellicoe has organised a Christmas social on Saturday 16th December at the Canary Gin Bar on Queen Street. I hope lots of you can make it!

Our very own Mel Golding has landed an impressive book deal for her novel Little Darlings, which HQ acquired for a “significant six-figure sum”.
Little Darlings “offers a fresh perspective on modern motherhood and postnatal depression”.
The UK and Commonwealth rights were bought within 48 hours of submission in what Mel’s agent Madeleine Milburn called the “fastest response I’ve ever seen” to a manuscript.

After signing with Hellie Ogden at Janklow & Nesbit, Anna-Marie got a two-book deal with Atlantic/Allen & Unwin. Her novel The Illumination of Ursula Flight is out 3 May 2018 and here it is on Amazon!

Anna-Marie said “Thanks so very much to everyone who read and critiqued it on the course. I’m now working on my second book.”

Daisy signed with Matilda Forbes Watson at WME who sold her book to Orion with publication aimed for late summer 2018. And last month Daisy began the PhD in Creative Writing at Bath under Sam Harvey’s supervision which Daisy described as “hard work but great!”

Julia Grigg (aka Julia Spry-Leverton) has signed with Unicorn Press, an independent London and Chicago-based press specialising in the visual arts and cultural history. Julia’s debut historical fiction, entitled THE EYES THAT LOOK – the secret story of Bassano’s Hunting Dogs is due out September 2018.

News from the North. Molly signed with the lovely Hellie Ogden at Janklow and Nesbit in May 2017. Since then she’s been editing like a mad woman. She’s on draft a gazillion. Currently, Molly works full-time as a copywriter for the advertising agency seventy7. She’s suffering sleep deprivation and is hoping some kind publisher will take her novel off her hands in the New Year so she can get a full night’s sleep.

Deirdre has joined a writer’s group through New Writing South specifically for second novelists. She is also volunteering with Little Green Pig, an organisation which supports young writers in Brighton.

In terms of The Howl of the Waves, her edits are still ongoing and she has some open submissions but is still seeking representation.

In her non-fiction writing, Vertebrate Publishing, a flourishing independent, has commissioned her to produce another guidebook, Day Walks on the High Weald, for publication in 2018. If anybody is looking to give outdoor guidebooks as Christmas presents she has four other walking and cycling guidebooks which make very good presents…

In 2018, she is running creative writing and photography workshops in partnership with Made and Making.

Mike‘s novel Down in Demerara is now ready for submission to agents. Armed with a lovely quote from Fay he’ll be sending it off in the new year. If you know of any agents that are on the lookout for a funny and quirky tale of self-realization through love, friendship and fear do let him know!

Yet again he’s been involved in the Bristol Festival of Literature. He ran a workshop on writing history and read a bespoke story for an event in Redcliffe Caves. His new thing this year was literary events in a pop-up restaurant! He organised a poetry evening which included our very own Rebecca Tantony – a raging success. Mike said, “the major challenge was to work out the costing – but we did eventually sell-out at £30.00 a head.”

Do let him know if you have a proposal for a Lit event for 2018 – if they run it’ll probably be in the second half of October.

Apart from ‘breakfasting at Weatherspoons’, he’s editing a magazine ‘Better Bristol’ – about architecture, planning and the built environment – totally his bag and a good opportunity to air anti-Brexit views – but let’s not go down that route!

Otherwise, he’s been indulging in his fascination with the Middle East, and after visiting Iran last year, spent some time in Uzbekistan this autumn. There’s a book in there somewhere!

Val hasn’t done anything with her memoir since leaving the course. It was enough for her just to finish it!

She’s been working on a lot of other projects though including collating and editing another anthology (she had so much fun doing it last time!) This time it’s for her local writing group – only 18 people contributing, although some are writing multiple pieces so there are 40 submissions so far. It’s another book of tales based on the legends and history of the Forest of Dean and is being launched in Chepstow bookshop next February.

She’s also run a few creative writing workshops including one at her local comprehensive school to encourage students to start writing and has resumed teaching her enthusiastic U3A group of writers. Earlier this year she won the best poem award at the Mid-Somerset Festival, was invited to read at the Mitcheldean Poetry Festival and has since been runner-up in the Coleford Festival of Words and the Gloucester Writers Network competition for a piece of prose which she read at the Cheltenham Literary Festival. She also read a story for Corinium Radio based in Cirencester.

Maddy is still writing away and hasn’t tried with agents yet. The novel is slow going! She is working in a bookshop in a suburb in the east called Rose Bay. The shop is called Berkelouw Books. They’re very old booksellers (for Oz anyway). She gets to read proofs and a tidy little discount.

She is enjoying being back in Oz and getting to know her two new baby nephews.

That brings us to the end of our first newsletter. Thank you so much to everyone who has sent news for this one, I am really happy to see how wonderfully you are all getting on.

In the meantime, all is left for me to say is that I hope to see lots of you at the Christmas social and that everyone has a wonderful Christmas (with lots of books).

See you all soon, 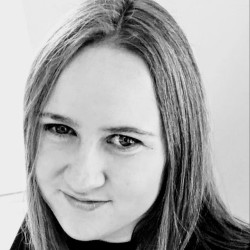 Follow Me
Eleanor St Clair
I have blonde hair that changes colour – this week it is pink – and I am living in the basement of Jane Austen’s house in Bath. My novel LIKE, follows twenty-five-year-old Erica as she comes to terms with being single after unceremoniously dumping her boyfriend over breakfast

We are the MA in Creative Writing 2017.
This is PLUME Anthology